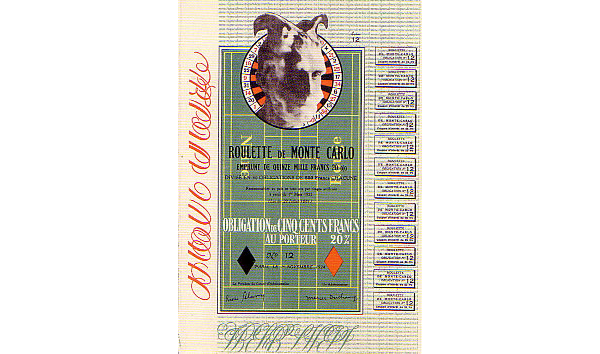 Or how Marcel Duchamp, Pope of Dadaism, found a way to play in financial peace at the Casino de Monaco ....

In 1925 Marcel Duchamp has stopped painting and devoted himself to games and especially to chess. He imagines a way to finance a system supposedly infallible to win at roulette. To build up a capital of 15,000 francs, it suffices, he thinks, to issue bonds of 500 francs at 20% interest "repayable at par over 3 years by artificial drawings".

The bonds exhibit the image of a Duchamp larger than life in his appearance of a little devil with oversized ears, and his face coated with shaving foam. It is believed that he thus seeks to resemble Mercury, the god of commerce. We find his portrait in roulette, a photograph of his friend Man Ray.

At the top, he continuously prints on several lines the following play on words: mosquitoes, servants, demistock. On the back are extracts from the articles of association of the company.

Each bond bears the signatures of Duchamp and that of a pseudonym "Rrose Selavy", a name under which Marcel is almost as well known as the real one. Duchamp appears there as the president of the company. This signature is already worth more than the value of the obligation.

A 50 cent stamp is stuck on the title, which guarantees its legal value.

Only 30 coupons are planned and in the end only 8 would have been printed in 1924, a sign that it probably did not find many buyers, most of them having been sold to relatives including Jacques Doucet, Marie Laurencin, Ettie Stettheimer, George Hoyningen-Hune. He also sold a bond (number 22, indicated on the stamp and on each coupon) to his close friend Madeleine Turban, from Rouen, whom he had met in 1917 in New York during a sale for the benefit of the Red Cross.

On December 2, 1925, we know that Doucet received a first dividend of 50 francs (the coupons being 25 francs).

Duchamp donated the number 12 (unstamped) to the Museum of Modern Art in New York.

Some copies were exhibited in museums during exhibitions on Marcel Duchamp (Venice, Basel). 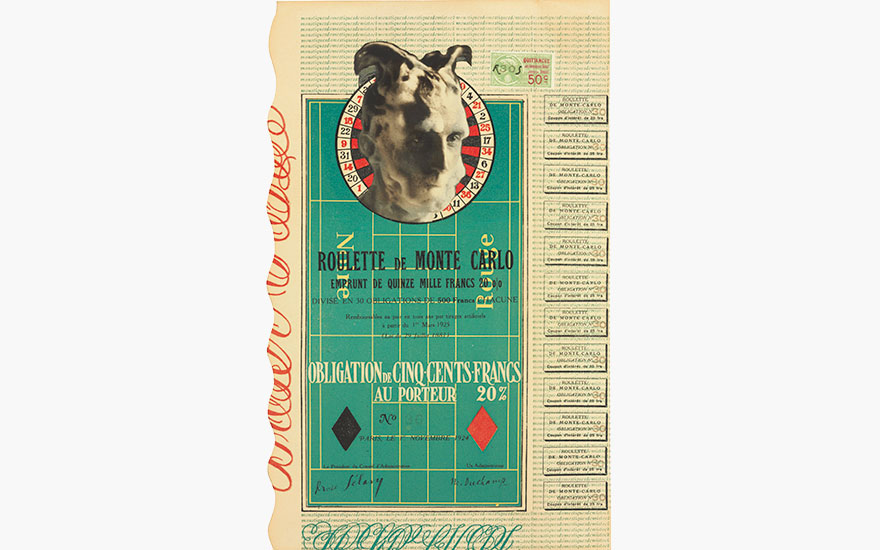 In 1938, the 20th century newspaper asked him for a reproduction for its Christmas edition and Duchamp offered a facsimile lithograph of title number 12 which had not been stamped.

The lithograph (number 12) fetched 20,000 francs several years ago in auctions (around 3050 euros) and was recently seen in sales of old titles with an estimate around 5,000 eiros.

If the buyers of the bonds probably did not get their money back at the time, their heirs were very lucky. The original number 1 sold for € 820,000 at an auction in New York in 2010. Another original, number 30, owned by a member of the Matisse family who acquired it from Mme Marcel Duchamp in Neuilly-sur-Seine, was sold for more than 2 million US dollars during a sale by the famous Christies auction house in New York in 2015!

* Dadaism: name given to an artistic movement animated by a spirit of revolt, provocation and derision against bourgeois art and the established order. Launched by Tristan Tzara, Dadaism (that is to say the school, the Dada movement) is at the origin of surrealism. Illustrated in Dadaism: Marcel Duchamp, Man Ray, Edgar Degas, Picasso ...