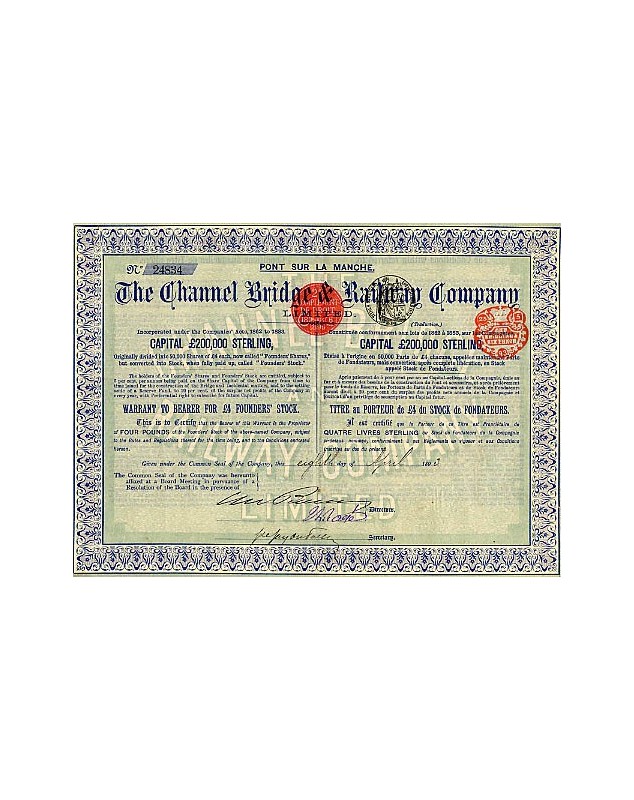 It was about a company of studies and construction of a bridge on the Channel.

In the 1850s, many projects appeared, such as that of a bridge over the Channel.

The idea of ​​a junction of the French and English railways was born in 1836 in the mind of Thomé de Gabond, chief engineer of the Pas-de-Calais department. In 1849, after studying this project, MM. Combes and Elie de Beaumont analyzed the soils of the Channel and deduced that it would be possible to build a bridge there. The French engineer Mr. Vérard de Sainte-Anne first thought of a metal bridge. Its work was taken over by another engineer, M. Hersent and MM. Schneider and Cie du Creusot.

A set of plans was presented at the Universal Exhibition of 1889 in Paris, starting from Cap Gris-Nez in Folkestone.

An idea for a tunnel was proposed by an Englishman Edward Watkins but was not retained because of its dangerousness and its complexity in terms of ventilation. Three tunnels were imagined, one for the outward journey, the other for the return, a third for ventilation.

Finally a tubular tunnel is mentioned by Edward Reed, sunk in the soil of the strait. He created a company with a capital of £ 40,000, the "Préliminaire du Chemin de Fer Tubulaire de la Manche". Sir Edward J Reed, one of the architects of the very powerful English fleet which will dominate the oceans. He does not think he is doing so well in naming his company “Preliminary Company”, since it will take 102 years for the current Channel Tunnel to open!

These tunnel projects did not appeal to the British military authorities, however.

Advances in hydraulic engineering and steel construction tend to tip the scales towards the idea of ​​the bridge. The company appears feasible in the eyes of engineers who estimate the construction time to be around ten years. The bridges of Porto on the Douro, of Brooklin, of Garabit in Auvergne, that of Forth in Australia, are given as examples. The question of the navigation of boats, both sailboats and liners, on the English Channel remains important. The lighting and marking system of the bridge is therefore studied.