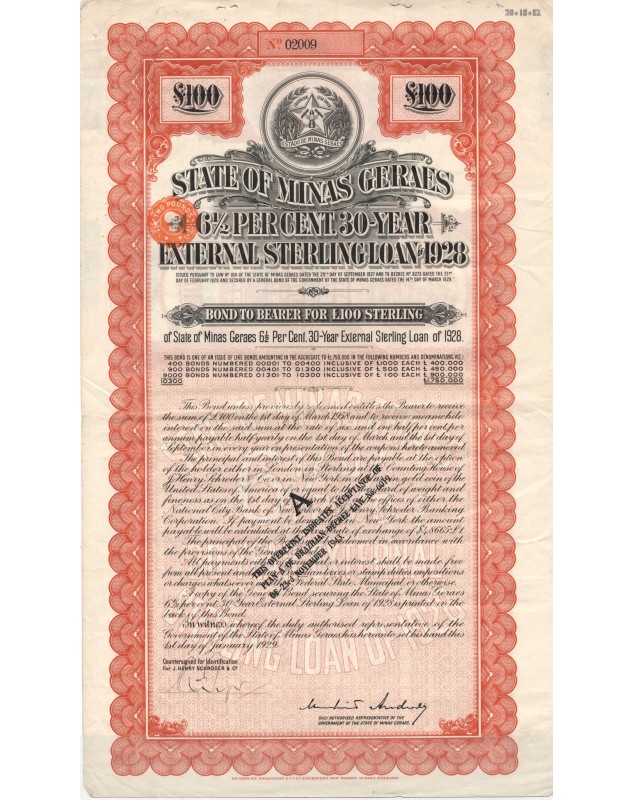 Minas Geraes, which experienced significant development in the 18th century thanks to the gold and precious stones that were discovered there, is one of the largest states in Brazil and the second most populated after São Paulo.

The payment of the coupons and the redemption of the shares were to take place in London at the Counting House of J. Henry Schroder & Co (Countersigned the bond), with Baring Brothers & Co. Ltd and N.M. Rothschild & Sons ("the bankers").

Bond signed by the representative of the Government of the State of Minas Geraes.

Copy of the General Bond securing the State of Minas Geraes printed on the back of this bond.

Very rare! Only few specimens (number 0 or cancelled) have been sold the last few years).

You can read interesting document about the Brazilian Debt:

"in 1943 the Brazilian government worked out an extensive renegotiation of the external public debt issued by the
Central Government, States and Municipalities in pound sterling and in dollars during 1883-1931 in the first case, and during 1901-1931 in the second case.
This renegotiation was made with two organizations of bondholders of Brazilian external public debt, “The Council of the Corporation of Foreign Bondholders” in London and “Foreign Bondholders Protective Council, Inc.”, in New York. The final agreement gave birth to Decree-Law (DL) 6019/43 in November 25, 1943, that authorized and determined new rules for the retaking of the Brazilian external payments, which by then had been interrupted.
According to the new rules, from January 1, 1944, the payment of interest and of the amortization of the external debt bonds should be realized in accordance with two forms: Plan A and Plan B. The Decree-Law states that “Plan A keeps the nominal and original value of the bond, fixing new and definitive interest rates and amortization quotas".