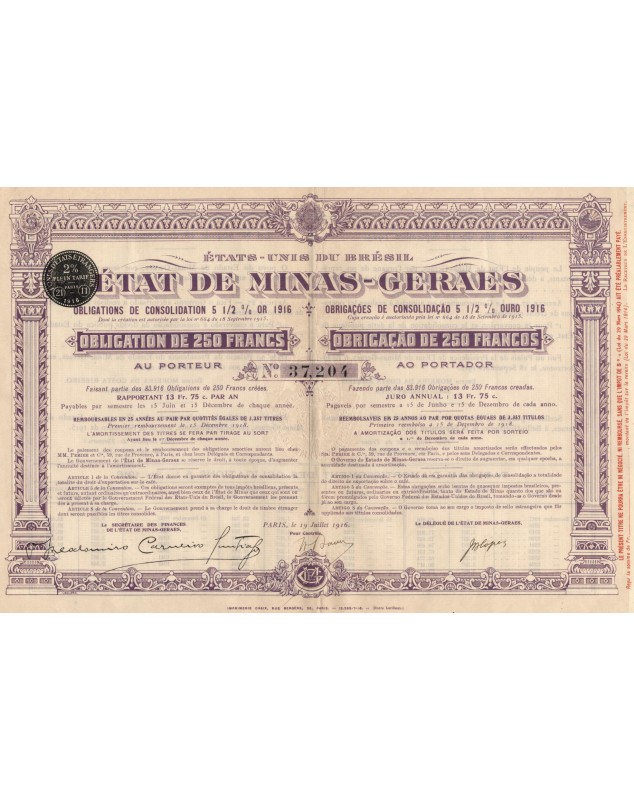 Minas Geraes, which experienced significant development in the 18th century thanks to the gold and precious stones that were discovered there, is one of the largest states in Brazil and the second most populated after São Paulo.

The loan was secured against the full export duty on the coffee.

A loan of 50 million francs was created, called Municipalities Loan, created under the law and decree of September and October 1910 to facilitate the main municipalities the execution of building works, water supply, electrical installations, etc The loan was represented by 100,000 bonds of 500 francs at the annual interest rate of 4.5% gold or 22 fr. 50, net of present or future Brazilian taxes and French taxes, payable by half-yearly coupons from 1917 to 1974.

As of December 31, 1920, 1,625 securities were amortized. But the government of the State of Minas Geraes having been able to meet the interest of these bonds in 1915 created bonds of consolidation 5.5% 1916 of 250 francs each, amortisable in 25 years and intended for the partial payment interest and amortization overdue for three years.

The payment of the coupons and the redemption of the shares were to take place at MM. Perier & Cie, 59 rue de Provence in Paris.

Title signed by the Secretary of State for Finance on behalf of the State of Minas Geraes.

These federal loans were quoted on the Paris Stock Exchange.