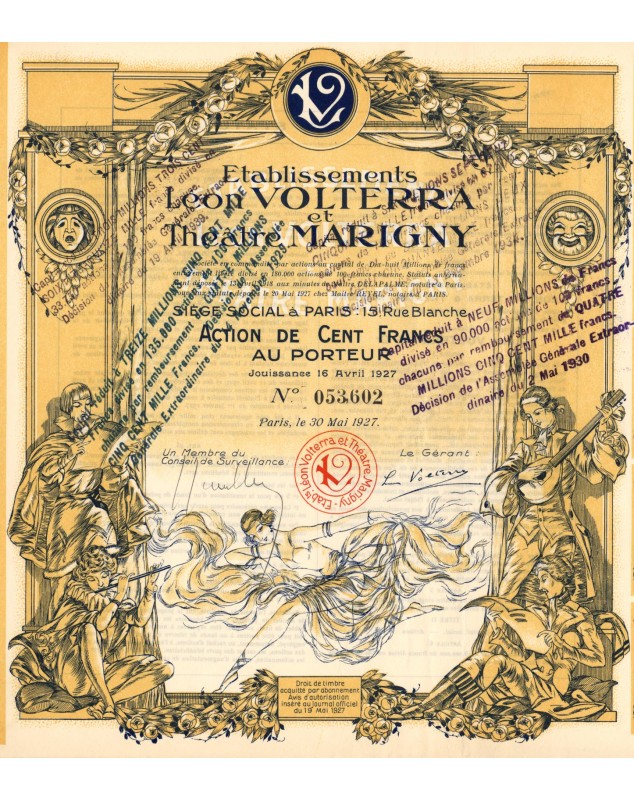 The Société Anonyme du Théâtre Marigny was transformed into a Société en Commandite par Actions and changed its name to: Etablissements Léon Volterra and Théatre Marigny. The head office of his company was located at 15 rue Blanche.

The purpose of the company was to operate the Théâtre Marigny (Carré Marigny, at the corner of the avenue des Champs-Élysées and the avenue de Marigny), the Théâtre de Paris (15 rue Blanche), the Casino de Paris and the Etablissement du Perroquet (16 rue de Clichy), a restaurant-dancing establishment Marigny "Potinière des Champs-Elysées", a sewing workshop for theatrical costumes and stores for sets (31 rue d' Avron).

The Theatre Marigny was built in 1880 by Charles Garnier, architect of the Paris Opera. The hall was further enlarged and modernized in 1925 by its new director, Léon Volterra, already at the head of the Paris theater and Eden.

The theater is the scene in 1912 of one of the first scams of Alexander Stavisky, then only 23 years old.... Stavisky rented the theater from the City of Paris for the summer season, it being closed during this season. Stavisky publishes classified ads in Le Matin and Le Petit Parisien to recruit employees: "administrator, secretary, tobacconist, buffet dealers, flowers, sweets, weavers, advertising for the curtain, program, etc." To each candidate they ask for the payment of a deposit to allow them to pay the rent of the lease. But Stavisky keeps the money to himself, never settling his debts to the city. Prosecuted, war breaks out and he narrowly escapes prison.

Beautiful well decorated certificate with coupons on the right side.