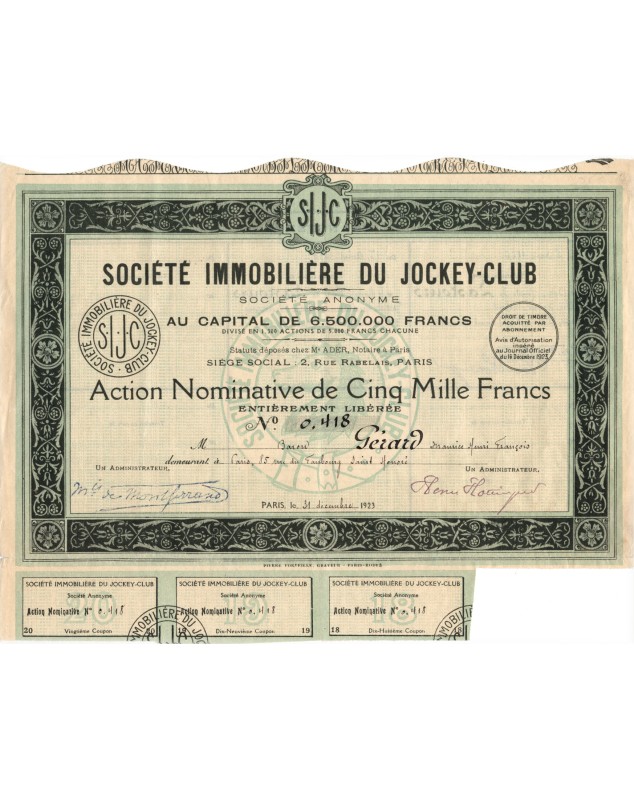 Registered share of 5,000 francs issued to Baron Gérard in 1923 in Paris. Baron Gérard - Maurice Henri François - (1880-1929), Member of Parliament for Calvados, was a member of the Jockey-Club.

The real estate company founded in 1923 had for object the construction of a hotel entitled Le Jockey for the installation of a private club (called at the time "circle") at 19 avenue Matignon (former rue Matignon) or 2 rue Rabelais. The company's head office is located at 2 rue Rabelais. This is where the circle settled in 1925 and it is still the address of the Jockey-Club de Paris association.

The Jockey-Club organized the first races in Chantilly, about forty kilometers north of Paris. The Prix du Jockey Club was awarded for the first time in 1836 and is still run at the beginning of June at the Chantilly racecourse.

The share is signed by the Marquis de Montferrand, president and Baron Hottinguer (Viscount of Pomereu), administrator.

Title illustrated in the background of a bust of a horse.

Rare document: only 1300 shares issued in the capital.

16 other products in the same category: