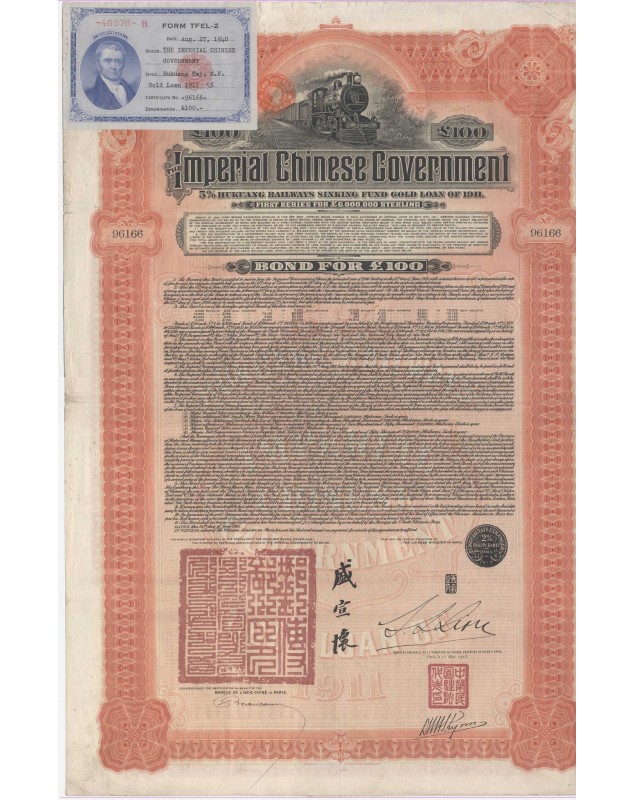 Countersigned by the Bank of Indo-China.

Original antique bond issued by the Imperial Chinese Government in 1911 (1st issue of £6,000,000 sterling for the Sinking Fund of the Hukuang Railays).

Fac-simile signatures of the Chinese Minister in Paris, the Minister of Posts and Communications of the Imperial Government of China.

Countersigned by the Banque de l'Indo-Chine in Paris.

VERY RARE ITEM: With "bluebird" attached: pasted on the bond at the top left the form TFEL-2 dated 1940, and illustrated with the portrait of John Marshall (1755-1835), American jurist and politician who gave an essential role in the creation and interpretation of the Constitution, giving the Supreme Court a central role, inspired by common law practices.

Similar to the freezing of terrorist assets in today's world, the U.S. attempted to prevent hostile interests from trading securities and thereby funding World War II efforts. That action also inadvertently blocked the securities of victims from those same countries. It turns out that TFEL-2 was a form that allowed friendly, non-hostile foreign nationals to trade American securities during the war. Quoting Chapter III, Assets in the United States, this curious form, TFEL-2, was attached to securities "if the owners could prove that they were free from any blocked interest.