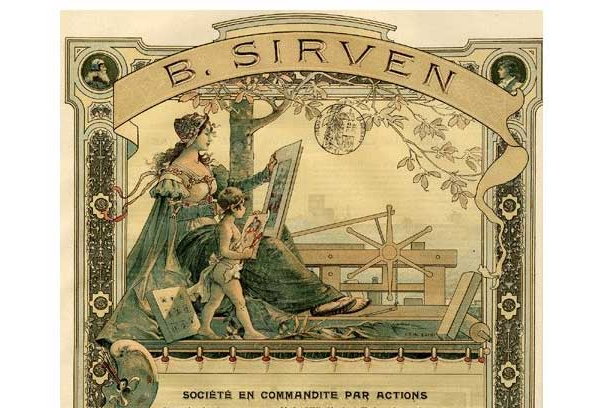 Discover the history of the Sirven family, a dynasty of printers, whose descendants designed the Cachou Lajaunie boxes!

The company was founded by Bernard Sirven (1813-1886) rue de la Colombette in Toulouse in 1834. It was specialized in lithography, but also binding, stitching, cardboard, office and school supplies... Sirven also owned a cardboard factory. The company produced many advertising posters including the famous Belle Epoque advertisements illustrated by the artist Alphonse Mucha.

Joseph Sirven (1835-1905), son of the founder, took over the printing business. He was also mayor of Toulouse from 1884 to 1888. During the Franco-German war of 1870, the workers of the Sirven printing press, under the direction of Joseph and his brother Joseph-François published the dispatches of war in order to give news of the front to the wives of soldiers. This was the birth of the newspaper Dépêche du Midi.

It was then Joseph's grand son, Gaston Sirven (1895-1957), son of Henri (1863-1918) who took over the management of the company and launched into the manufacture of metal boxes, including the famous Lajaunie cachous. In 1904, Léon Lajaunie ceded the exploitation rights to Sirven.

Gaston Sirven's son, Alfred, born in 1927, turned to other activities far removed from printing and cachous...

The share certificates of the printing house are beautifully decorated by the artist Luigi Loir. A color series was printed. 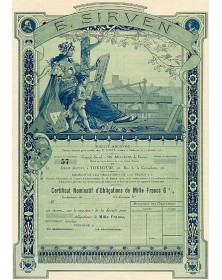 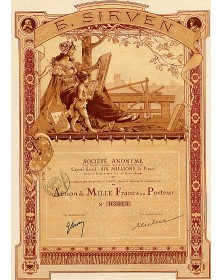