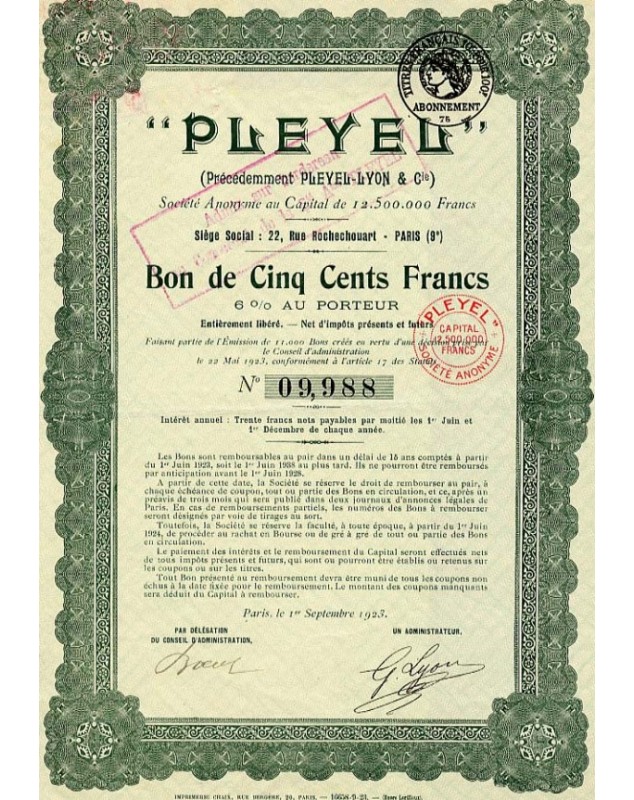 It is one of the oldest manufacturers of pianos.

It has had her expertise recognized by numerous artists, including Frédéric Chopin, Camille Saint-Saëns, Maurice Ravel, Igor Stravinsky and Manuel de Falla.

The company was taken over by Ignance's son, Camille Pleyel until 1855, then by Auguste Wolff, who created a 55,000 m2 factory in Boulevard Ornano, in Saint-Denis. Equipped with steam engines, the factory produced 2,500 pianos in 1887.

It was then taken over by his son-in-law Gustave Lyon in 1883. Engineer, the latter improved the acoustic quality of the pianos and modernized the factory.

Gustave Lyon is passionate about the acoustics of concert venues and specializes in speech therapy in halls. Which led him in 1925 to launch the construction site of the Pleyel room, rue du faubourg Saint-Honoré, in Paris.

But the crisis of 1929 was fatal for the Pleyel group: the pianos filed for bankruptcy in 1933, and the hall was taken over by its banker, Credit Lyonnais, in 1934.

When Gustave Lyon died, the Pleyel pianos and the Pleyel hall were separated.

In addition to the Pleyel pianos, Hubert Martigny bought the brands "Érard", "Rameau" and "Gaveau". Victim of very strong commercial competition from the Asian and especially Chinese markets, the Pleyel factory closed in 2007 its Alès factory, opened in 1973, to relocate in Saint-Denis.

Since 2017, the brand has been the property of the company Algam, which produces pianos in France and Indonesia.