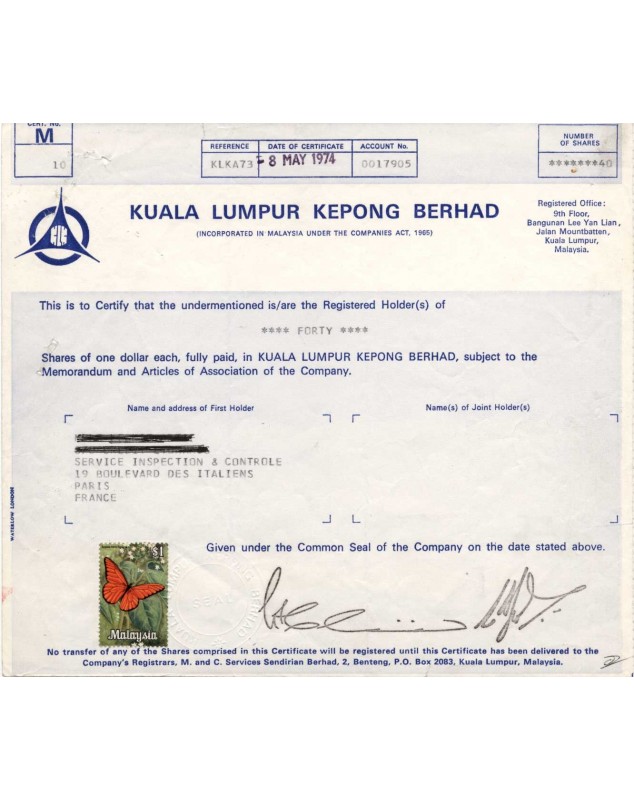 Kuala Lumpur Kepong Berhad (“KLK”) is a company incorporated in Malaysia and listed on the Main Market of Bursa Malaysia Securities Berhad. It has a market capitalisation of approximately RM24.931 billion at the end of September 2019.

The Kuala Lumpur Rubber Company Limited (“KLRC”) was incorporated in London in 1906.

With a capital of £180,000, KLRC acquired 5 estates totalling 640 hectares of land planted mainly with rubber and coffee, located in Kuala Lumpur. KLRC shares were listed on the London Stock Exchange in 1907.

By 1956, KLRC had grown to 4,384 hectares of rubber, with a reported 35% immature and 65% mature, about half of which were seedling rubber and the other half budded rubber.

Oil palms were not planted as yet, but some experimental coffee was planted, and sporadic tin mining activities were carried out.

Between the years 1959 to 1961, a spate of acquisitions took place. Around this time KLRC also acquired The Eastern Sumatra Rubber Estates Ltd. which owned plantations in Sumatra, Indonesia.

As the largest of these plantation companies acquired was the Kepong (Malay) Rubber Estates Ltd., the Company’s name was changed to Kuala Lumpur-Kepong Amalgamated Limited (“KLKA”) in 1960.

By this time, the Company had increased its plantations holdings to approximately 30,000 ha.

As a final step, in 1973 under a Scheme of Reconstruction, Kuala Lumpur Kepong Berhad (“KLK”) was set up in Malaysia and Lee Loy Seng was appointed the Founder Chairman.

With a stamp of Malaysia with a butterfly.