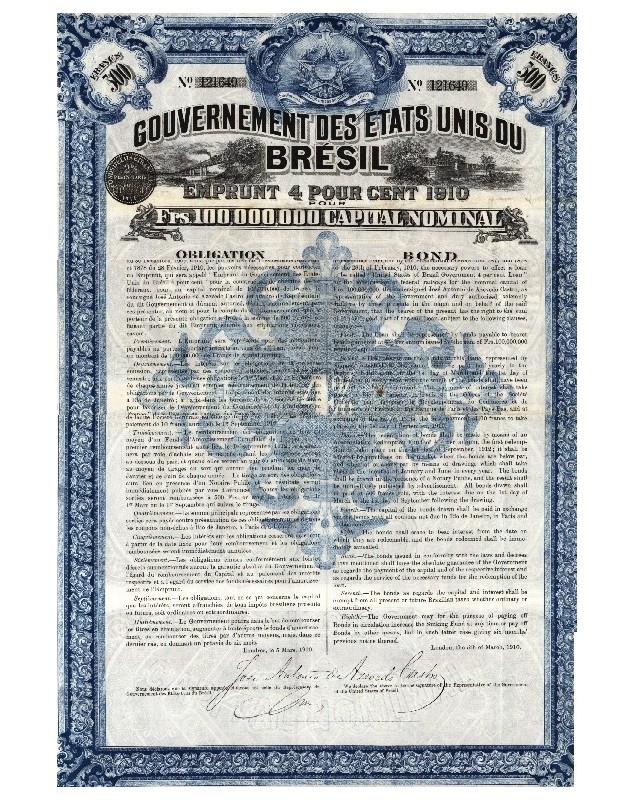 The purpose of this loan was to build the Goyaz railway network, under the terms of a contract signed on October 25, 1909 between the Federal Government and the Compagnie des Chemins de Fer de Goyaz.

The agreement allowed the Company, as soon as it was authorized to do so by the Government, to negotiate all or part of the securities in question and to deposit, at the disposal of the Government, in banks in the Paris marketplace and at the Banque of Brazil, 90% of the nominal value of the securities. This operation gave the Company the advantage of being paid in cash, with a 10% discount.

To carry out the negotiation of the securities and to obtain a payment in cash, the Compagnie des Chemins de fer de Goyaz contacted the Crédit Mobilier, a French limited company. The securities with a capital of 500F were created by Crédit Mobilier in 1910. The payment of interest was provided for in Rio-de-Janeiro, Paris and London.

The bonds of this loan were listed on the stock exchanges of Rio-de-Janeiro and Paris from March 1910.