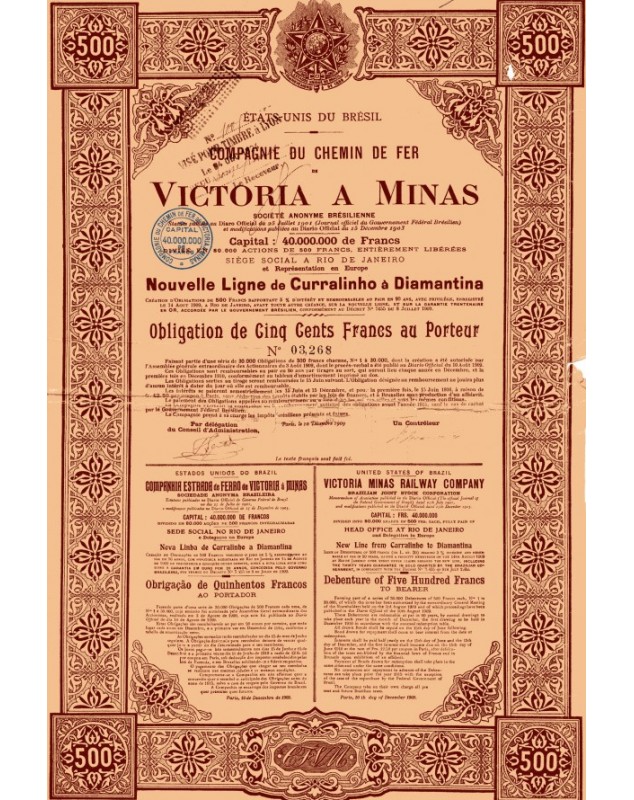 Brazilian limited company, incorporated on June 25, 1901, for a period of 90 years by the merger of the two companies of Peçanha in Araxa and Victoria in Peçanha. Share capital: 40 million francs, divided into 80,000 shares of 500 francs.

The purpose of the company was the construction and operation in Brazil of the railway line from Victoria (State of Espirito Santo) to Diamantina (State of Minas Geraes) and two other lines, one going from Santa-Anna dos Ferros to Itabira do Matto-Dentro and the other from Curralinha to Diamantina. The Brazilian government granted the Company a thirty-year guarantee of 6% on a capital corresponding to a maximum of 85,050 francs per kilometre. Since 1914, the Brazilian government has never paid the guarantee.

The company was condemned by judgment of the civil court of the Seine of July 10, 1930 to pay the French porters in gold. A meeting of bondholders held on September 22, 1938 approved an agreement under the terms of which the Company in formation "Compagnie Concessionnaire de l'Itabira" undertook to offer under certain conditions 5% bonds in exchange for Victoria Minas bonds. However, this agreement could not enter into force because the company was expropriated in 1942 by the Brazilian government. A clause in the Franco-Brazilian agreement of March 8, 1946 provided for the opening of negotiations between the Brazilian government and the representative of bondholders with a view to buying back the 5% 1902-1906 and 5% 1911 (Itabira) bonds.

Delegation in Europe, Paris and Brussels.