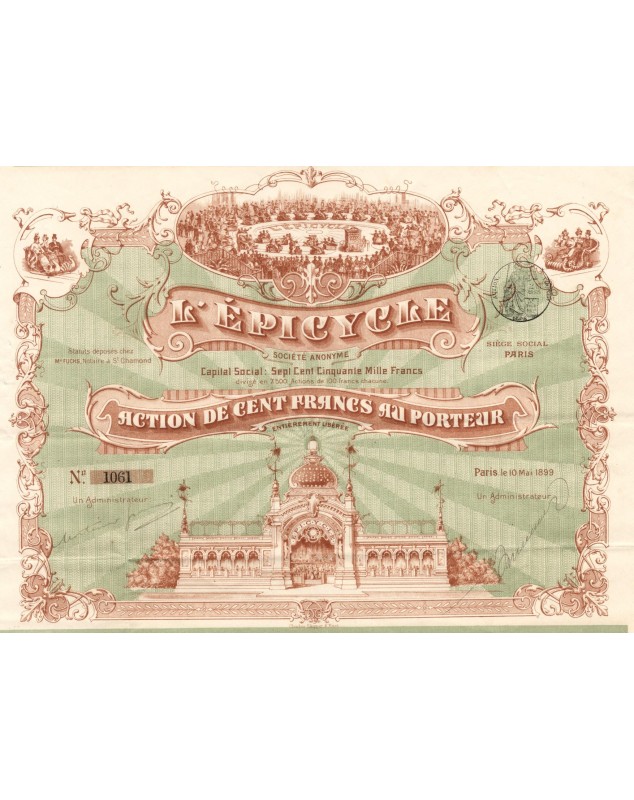 Near the Big Wheel and the "Swiss Village" the Epicycle (head office of the company at 49 avenue de la Motte Piquet), was to be the highlight of the Exhibition as was that of the Eiffel Tower at the Exhibition of 1899. This giant carrousel with continuous movement should never stopped, neither to get on or to disembark passengers from trains. 90 benches or small cars with animal shapes on the front (snakes, swans) would go around in circles with three people on board as can be seen in the illustration.

As the crowning glory of the building, a vast dome, which also spins - everything spins with the Epicycle! - would light up at night and projects the multicolored fires of its thousands of electric lamps into the distance.

The Epicycle Society claimed before it a future not enjoyed by other similar cases destined to die with the Exhibition itself. Because it could not only continue to operate the merry-go-round at any point in Paris, but since it also had exclusive ownership for France of the Epicycle patent, would sell the licenses for fairgrounds and other events.

The Universal Exhibition of 1900 welcomed more than 50 million visitors. But it seems that the Epicycle did not see the light of day since there is no trace of this construction in the list of attractions of the Exhibition ... The share has all the coupons, which probably means the company never paid dividends and went bankrupt quickly.

Magnificent decoration of the building and of the Epicycle, giant carrousel with continuous movement of 7 mothers of diameter imagined for the Universal Exhibition of 1900 invented by the engineer Armengaud.