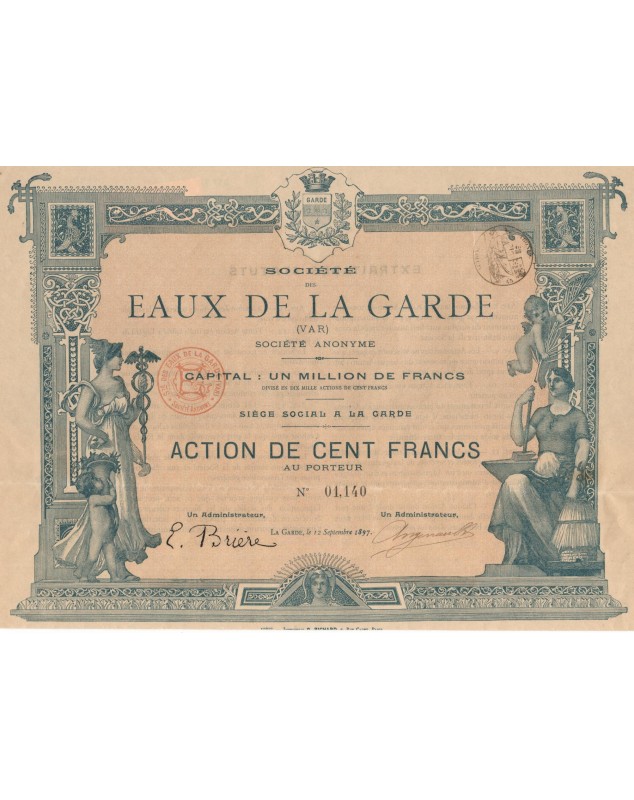 Very beautiful decoration, illustrated in particular by the coat of arms of Garde.

Belle de Coste and Lambert did not hesitate, in order to attract customers, to manufacture false subscription certificates for 6.141 cubic meters, when in reality the subscription requests did not exceed 24 cubic meters.

Angenault was responsible for placing the shares (his signature appears on the share).

The case ends miserably. In less than a year, the accused wasted more than 800,000 francs, and in 1898, the banker Angenault went bankrupt, leaving a liability of several millions.

The Société des eaux de la Garde was put into compulsory liquidation and of course no dividends were ever paid, hence the presence of all the coupons at the bottom of the title.

The defendants appeared before the city's criminal court for breach of the law on joint-stock companies. They were condemned: Lambert to one year in prison and a fine of 500 francs, with application of the Bérenger law; Belle de Coste at two years, and Angenault at six months in prison, this sentence merging with that of two years already pronounced against him.