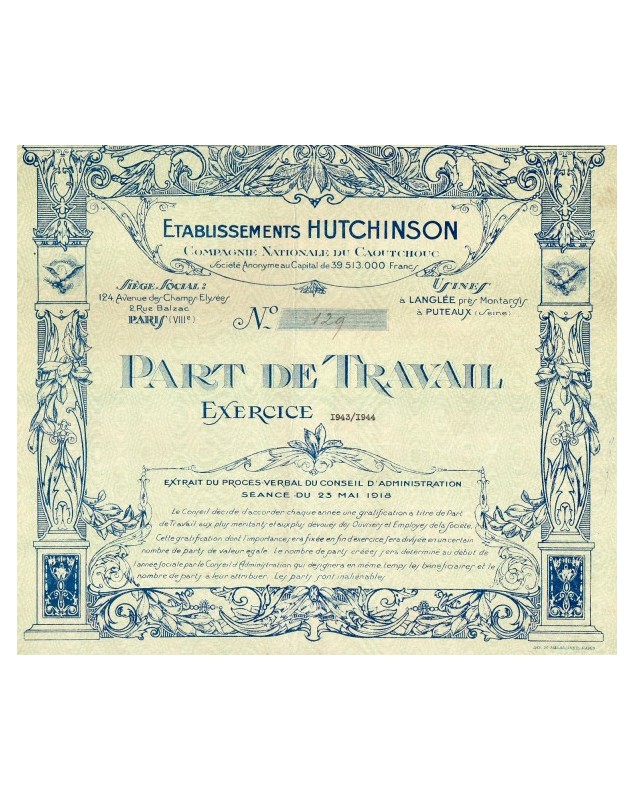 The purpose of the company was to operate the Hutchinson factories, in Langlée, near Montargis (Loiret), in Puteaux, in Persan-Beaumont (Oise) and in Mannheim (Grand Duchy of Baden); the operation of auction houses in Paris, Mannheim and London. Branches in France, Algeria, Morocco, Tunisia, Belgium, Switzerland and generally the manufacture and trade of manufactured rubber and all related items.

Hiram Hutchinson, an American engineer, obtained a license from Charles Goodyear in 1853 to distribute the brand. The factory is located in Langlée under the name of Compagnie du Caoutchouc Souple.

The company then manufactures tires for cycles (Monofil) and coated canvas for airships.

The company A. Hutchinson (A for Alcander, son of Hiram Hutchinson) is also the origin of the manufacturer of rubber boots "Aigle".

Today Hutchinson is a subsidiary of Total Energies. Its head office is still located at 2 rue de Balzac.