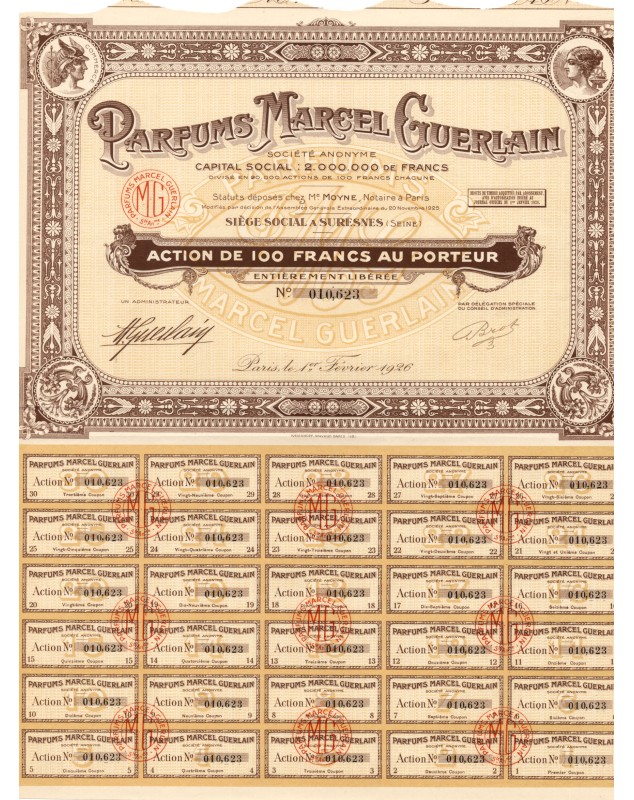 Marcel Guerlain (unrelated to the famous Guerlain house) founded his company in 1922 and produced perfumes and cosmetics.

He opened a splendid boutique at 86 rue du Faubourg-Saint-Honoré in Paris. Guerlain also has an office in London located at Parfums-Marcel Guerlain, Ltd., 252 to 260, Regent Street, London, W.l. and a boutique at the Waldorf-Astoria Hotel in New York.

From his luxury boutique on rue du Faubourg Saint-Honoré, Marcel Guerlain launched his "Rolls Royce" perfume in 1926 with a bottle imitating the grille of the luxury automobile. Only 2212 copies are produced. Perfume bottles (released in large numbers between 1925 and the 1940s) and make-up products (powder, lipstick) by Marcel Guerlain are manufactured by Baccarat and Depinoix ("Caravelle" perfume) or Julien Viard ("Cyprus perfume"). ").

The famous Guerlain house brought a successful lawsuit against Marcel Guerlain, who then changed the name of his company to Société des Parfumeurs Français. Marcel Guerlain then used his own slogan to advertise in the United States: "no link with a company of the same name".