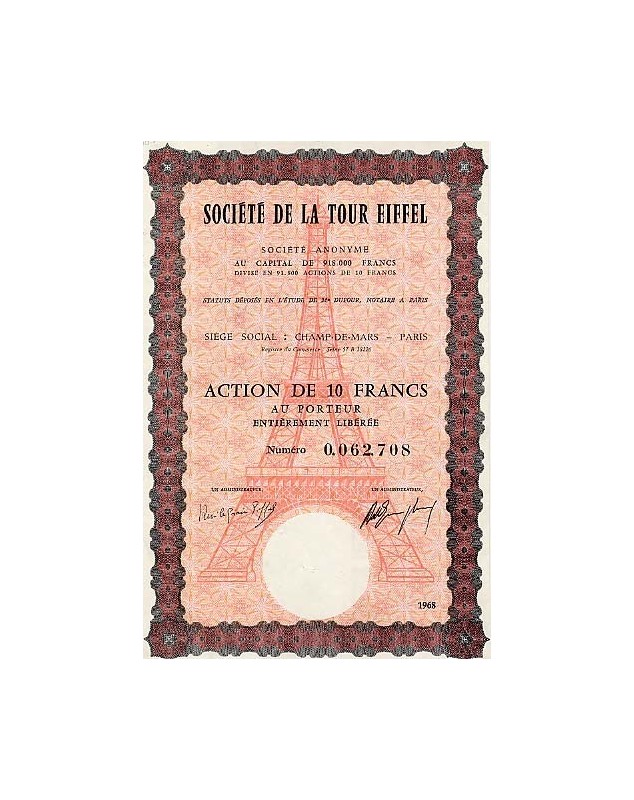 Share of 10 francs to bearer issued in 1968 in Paris. Rare illustrated document of the Eiffel Tower, mentioned the Champs de Mars head office.

The company of the most famous Parisian monument was founded in 1889 by Gustave Eiffel. It was emptied of its substance in 1979 when the management of the monument was taken over by the City of Paris, which found that the Tower was no longer very well managed: deformed structure, aged, poorly trained staff, too many, costly maintenance, standards safety not respected ...

The operating concession is then withdrawn from the Eiffel Tower Company to be entrusted to SAGI, then to the New Operating Company of the Eiffel Tower (SNTE) in 1980. The latter must return 90% of its profits to the City of Paris.

From 1980 to 1983, the first emergency work was carried out to lighten the weight of the tottering first floor (bringing it back to the weight initially calculated by Eiffel) to bring it back into conformity to comply with modern safety standards.

The gourmet restaurant Jules Vernes is also under construction. In 1986 the new lighting will be inaugurated.

The Company of the Eiffel Tower is today a real estate company essentially holding office buildings in the Paris region.

With some coupons on the right side.