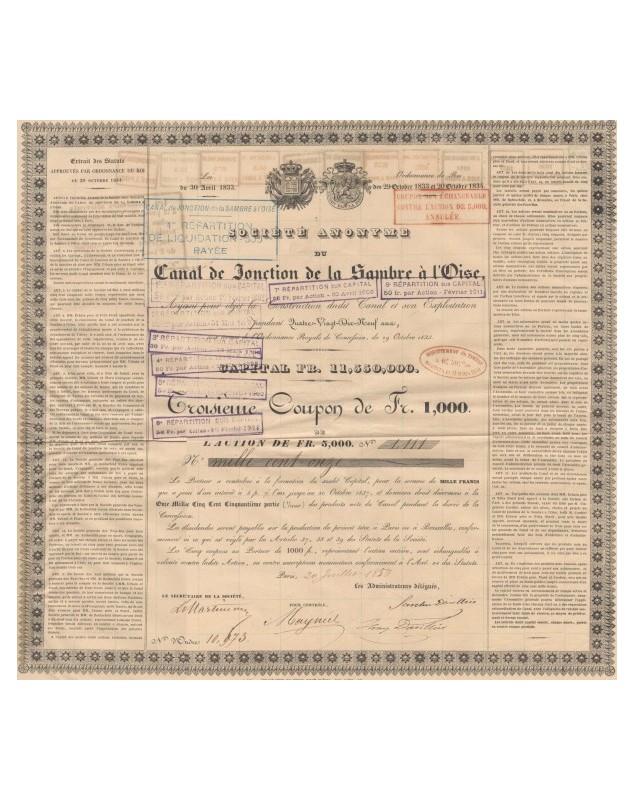 The Sambre à l'Oise canal is a channel with a Freycinet-gauge partition reach connecting the Sambre and Oise valleys, 71,000 km long, with 38 locks. It links the municipalities of Landrecies (North) and Tergnier (Aisne). Up to Oisy, the canal closely follows the course of the Sambre. The canal returns to the Oise valley at Vadencourt 19 locks below and continues its course along the river to join at Fargniers (municipality of Tergnier) the lateral canal to the Oise and the Saint-Quentin canal.

Its construction was decided at the beginning of the 19th century with the aim of supplying Paris with Belgian coal extracted in the mining basin of Charleroi, the production of the mines of Valenciennois no longer sufficient.

The company managing the canal was among the first listed on the Paris Stock Exchange. It was created with the help of Société Générale de Belgique.

Baron James de Rothschild (1792-1868) was one of the first administrators, as well as Count Henri de Baillet and the governor of Belgium Ferdinand de Meeûs, and Frédéric Basse and Samson Davilliers (whose signatures appear on the document).