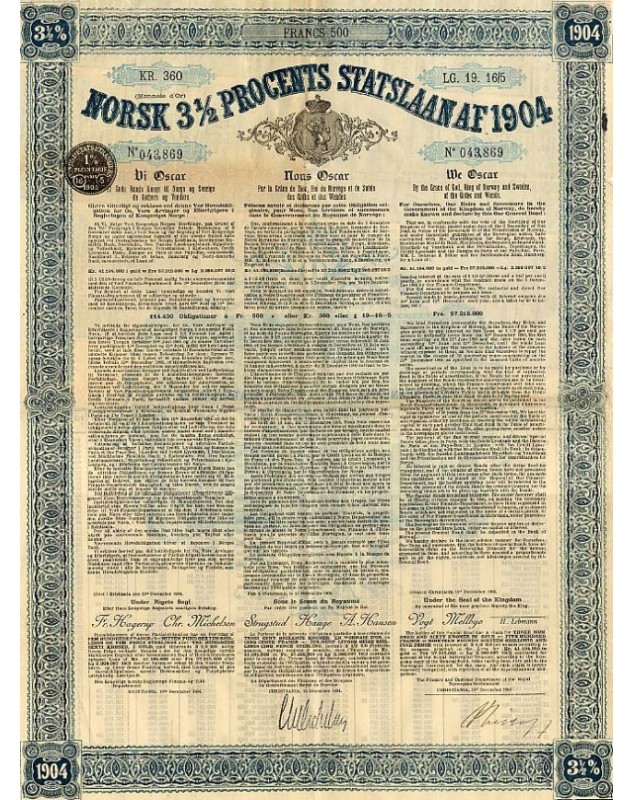 A trial took place in 1955 to settle the dispute over the repayment of the Norwegian debt to France.

Following the outbreak of hostilities in Europe, the convertibility of Bank of Norway banknotes was suspended on August 5, 1914, this measure having subsequently been confirmed by Royal Decree of August 18, 1914. During the following period, the Bank of Norway was authorized to resume the convertibility of banknotes into gold (1916) and to suspend it again (1920 ). This last measure was, in turn, revoked (1928) and Bank of Norway notes became convertible again. However, in 1931 the Bank's obligation to convert the notes was again suspended.

On July 6, 1955, France filed before the International Court of Justice an application instituting proceedings against Norway concerning certain loans that the latter had made between 1885 and 1909. The interest on these loans was paid in Norwegian krone since Norway's decision to suspend gold-currency convertibility. France wanted the Court to order Norway to make repayments of principal and interest on the basis of the gold value. Norway, for its part, raised certain preliminary objections relating in particular to the jurisdiction of the Court.

Unfortunately, the Court rules that it does not have jurisdiction to rule on the dispute brought before it by the Application of the Government of the French Republic dated July 6, 1955.

3 other products in the same category: