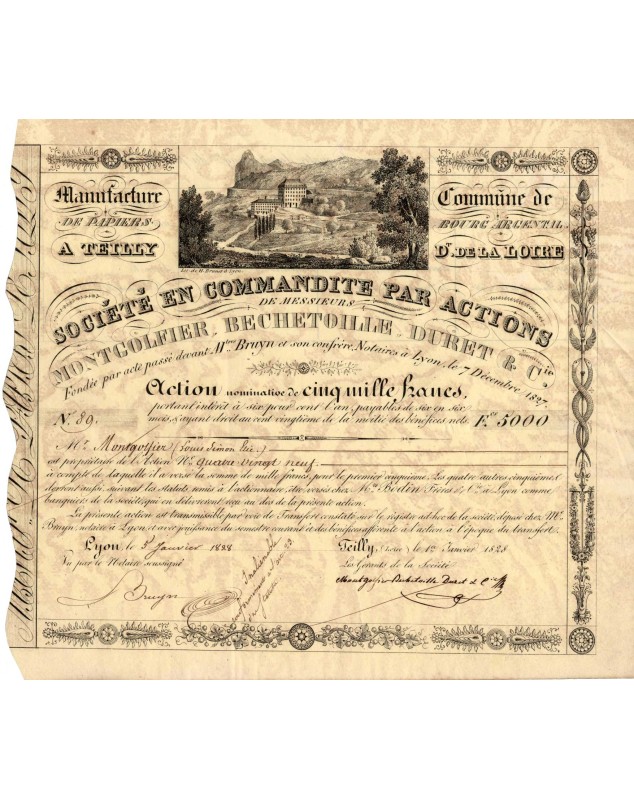 Share of 5000 francs issued to Mr Montgolfier in Teilly (Bourg Argental, Loire) in 1828.

Signed by the directors of the company: Montgolfier, Béchetoille and Duret

The Montgolfier family's interest in paper dates back to the 12th century when Jean Montgolfier learned to make paper when he was a prisoner during the crusades in Damascus. After his escape, he would have brought the secret back to Europe and would have settled in the production of paper, in order to replace the parchment.

The factory was founded in 1557 by Jacques Montgolfier.

Annonay (Ardèche) becomes the emblematic city of the paper industry with the establishment of the Montgolfier family, originally from Auvergne.

Joseph and Etienne Montgolfier flew the first balloon in 1782 in Vidalon-les-Annonay.

Several other inventions are to be attributed to Joseph Montgolfier: the hydraulic ram, the method of manufacturing vellum paper (support for the oldest titles!) and filter paper, called Joseph paper.

The Montgolfier family binds by marriage to the Béchetoille family, merchants in Bourg-Argental then bankers and to the Duret family.

The Montgolfiers also formed an alliance with the Canson family of papermakers, creators of tracing paper. The two families will also launch simultaneously in 1926 on the American market.