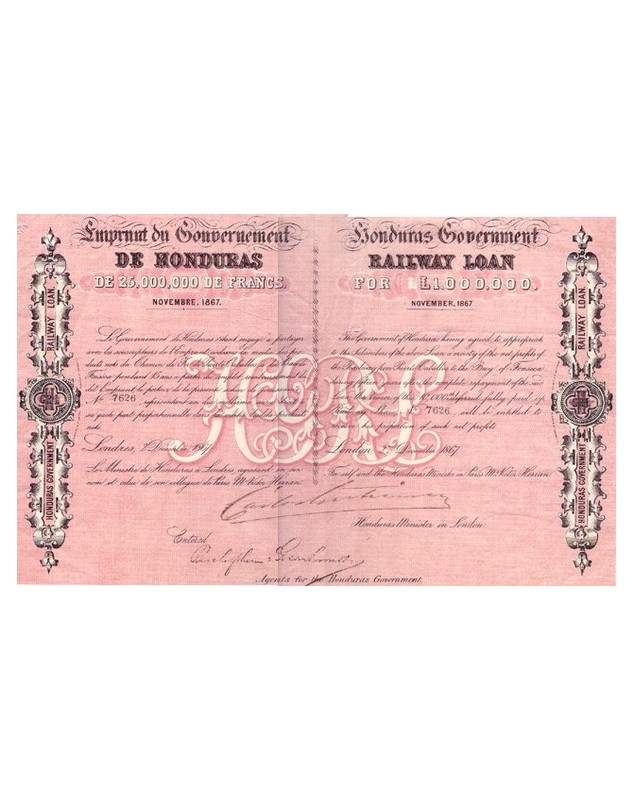 Loan guaranteed by the Government of Honduras, which undertook to share with the subscribers half of the net proceeds of the Railway from Puertos Caballos to Fonseca Bay for 15 years from the full repayment of the said Loan.

The proceeds of the loan were to be used to build an inter-oceanic railway line.

The bearer certificate is authentic and not canceled. It is signed by the Minister of Honduras in London, Don Carlos Guttierez. Guttierez was in charge of going to obtain funds in England, while Victor Herran, businessman, doctor and French diplomat originating in the Pyrenees having obtained the title of Minister of Honduras in Paris, was going to do the same in France.

15 years before the scandal of the Panama Canal affair, this project was indeed a real fiasco, and at the origin of a financial and political scandal on both sides of the Atlantic. Only 57 miles of track had been built between Puerto-Cortès and San Pedro Sula, and was abandoned in 1875. By 1904, the railway debt still amounted to over £ 2 million. The railway was finally completed much later in 1883 and remains today the only railway in the country.

For the whole story: https://journals.openedition.org/rhcf/1651