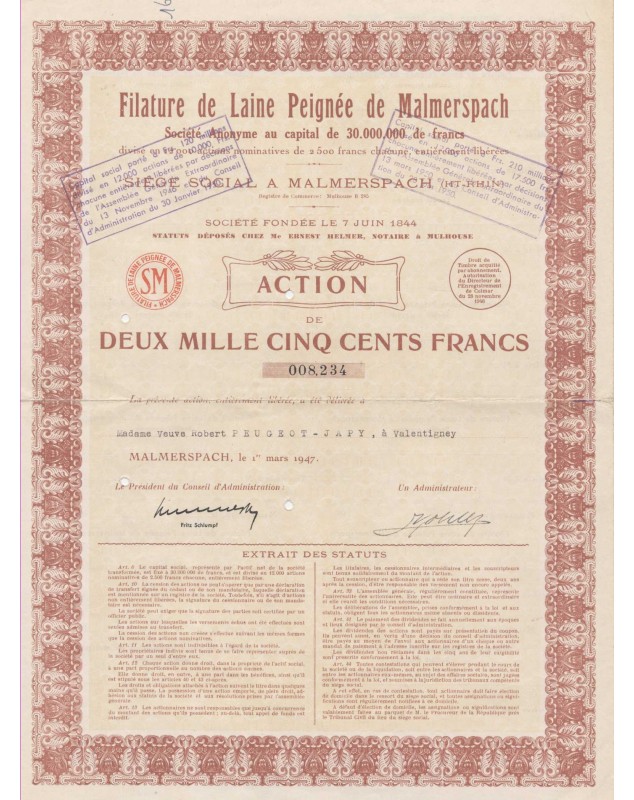 Nominative Share of 2500F delivered to the Peugeot family - Malmerspach 1947.

This spinning mill belonged to the Schlumpf brothers, Swiss financiers and industrialists who founded a textile empire in Alsace by buying many factories including those in Malmerspach.

Passionate about luxury cars, especially the Bugatti brand, they will create the Schlumpf museum in their old mills in Mulhouse.

This certificate was issued in 1947 to Madame la Veuve Robert Peugeot-Japy in Valentigney, then transferred (mention on the back of the title) to Mr. Jean-Pierre Peugeot in Seloncourt in 1964.

In the 70s, business became more difficult in 1976, the factory made redundancies. Employees are calling for the sale of their employer's car collection to fill the gap. A resounding lawsuit ensued for abuse of corporate assets and tax evasion and the Schlumpfs had the collection confiscated, which was classified as historical monuments in 1978 to prevent its dispersion. The collection is sold to the Association du Musée National de l'Automobile in Mulhouse.

The certificate holds the signature of Schlumpf.