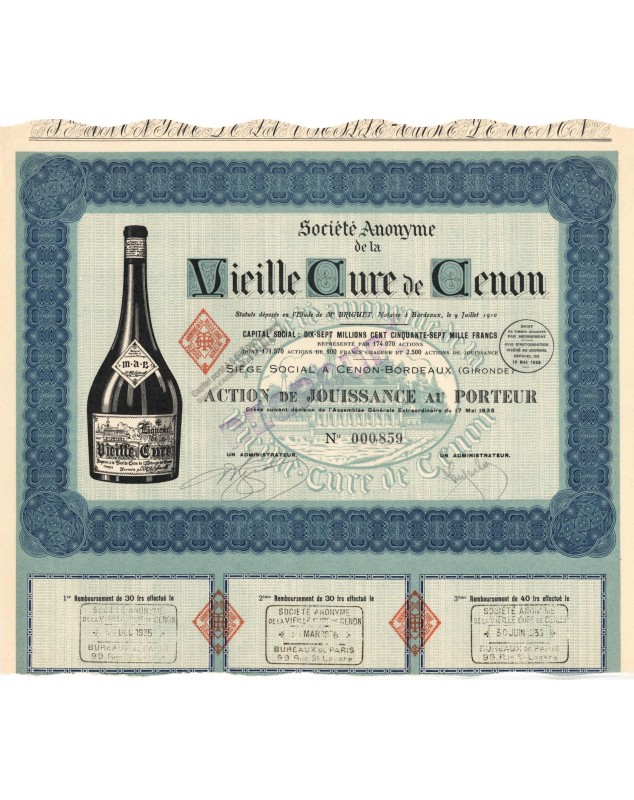 The company was founded in 1910 by the Dussaut family, owners of Château Lamothe, and Marcel Bussière, mayor of Cenon from 1915 to 1925, on the site of a former abbey of the monks of La Merci founded in 1218, grounds of Château-Gauvin, 36 rue Emile Zola.

The head office was located in Cenon-Bordeaux (Gironde), Château Gauvin and the General Management, in Paris, at 99, rue Saint-Lazare.

In the 20th century, the La Vieille Cure distillery produced a local golden yellow liqueur made up of 52 aromatic plants and called "La Chaleureuse". In 1909, it received the name of "Vieille Cure", from the name of the property which bordered the church of Saint-Romain de Cenon.

The bottle found on several titles of the company has a particular shape, a fake wax seal and Gothic characters.

The distillery site has been abandoned since the end of the 2000s. A project to transform the place into a "food factory" is underway on the land bought in 2020 by the City of Cenon.

The company was bought by the Dutch group Bolls in 1962, then it was the Inter-Marques company (liqueurs, cognac, armagnac) which moved into the factory until 1987. The AD company set up in its tower but ceased its activities in 2009.
The site of the distillery has been abandoned since the end of the 2000s. The city preempts the place. A project to transform the place into a "food factory" is underway on the land bought in 2020 by the City of Cenon. The initials MB of Marcel Bussière still appear on a stained glass window in the distillery.Signed by Bussière and Emile Dussaut.
Size: 33x21 cm and 33x28 cm with the 3 coupons.
1949