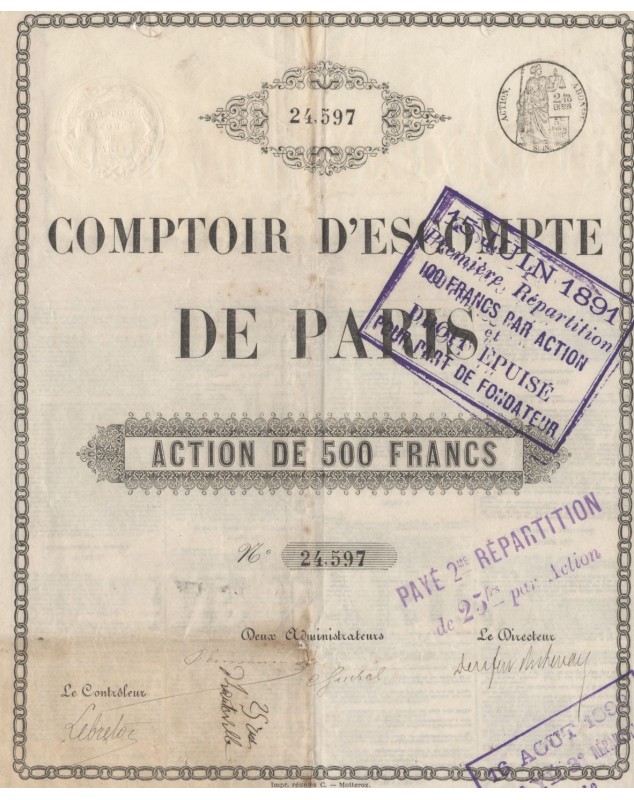 Created in 1848, this bank played an important part in the financial History of France and of its colonial expansion in the Far-East. It had quickly a remarkable network of branches and took part it the creation of the Bank of Indochina.

Eugène Denfert-Rochereau who was assistant-manager since 1880, then manager was the cousin of a famous french colonel, was also the director of the Bank of Indochina. Very active, he made many investments on all continents trying to counterbalance the influence of the English and of the Rothschild’s.

In 1886, he suggested to Freycinet, Minister of foreign affairs, to take advantage of the Hova Government allowance in Madagascar to establish there. He took care of the loan issue of 15 millions francs, garanteed by the Madagascar customs incomes.

He took interests in Portuguese and US railways loans, also in the Panama Canal affairs, and got involved in speculative actions on copper; these last operations brought him to commit suicide and the Comptoir was in brankrupt in 1889.

Under the influence of Maurice Rouvier, Finances Minister, the big credit organisations accepted to garantee secure funds which could help the Comptoir through the Banque de France.