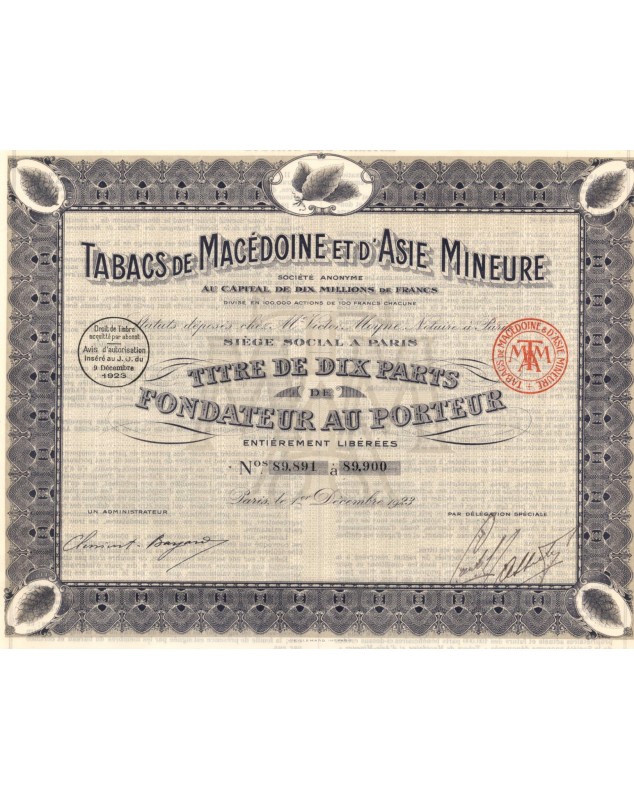 The company was founded in 1923 with the contribution of Tobacco, Trading and Finance Corporation, an American company created by Mr. Cassuto and Mr. Valensi and Kechicchoglou. The head office was located at 70, rue du Faubourg Saint-Honoré in Paris.

Valensi was president of The Importers and Exporters Insurance Company Od New York, a company whose capital and reserves exceeded two million dollars and which had its headquarters in its own building at 47 Beaver Street, New York.

Cassuto was the former director of N. Mayer and Company in Cavalla, a port city in Macedonia, through which flowed the best tobacco from the regions of Xantie, Dramo and Serès. In 1916, he was called to New York, as general manager of the Standard Commercial Tobacco Company Inc., a company in which the Schinasi firm, known in the American tobacco trade, was interested. It was thanks to the know-how of Mr. Cassuto who, during the war, negotiated nearly 7 million kilos of tobacco in New York, that the Standard Commercial Tobacco Company was able to supply the large cigarette factory R.-J. Reynolds Tobacco Company.

Kechichoglou was a renowned specialist in the Macedonian tobacco trade.

In view of the very satisfactory results obtained by Tobacco Trading and Finance Corp. the leaders decided to set up a European body to take over the operations. To this end, a French limited company was created: the Tobacco Company of Macedonia and Asia Minor.

There were in the board of directors of the company: MM. H. Bloch, A. Clément-Bayard (signature on the share), Charles Cassuto, Samuel Kechichoglou, H. Mosseri, E. Sitri, J. Valensi and E. Vasseur (probably from Banque Vasseur).

In 1924, founder's shares traded at 120 francs, shares at 350 francs. After successful years, Greece experienced strikes that affected the accounts of the company, which became loss-making from 1928.