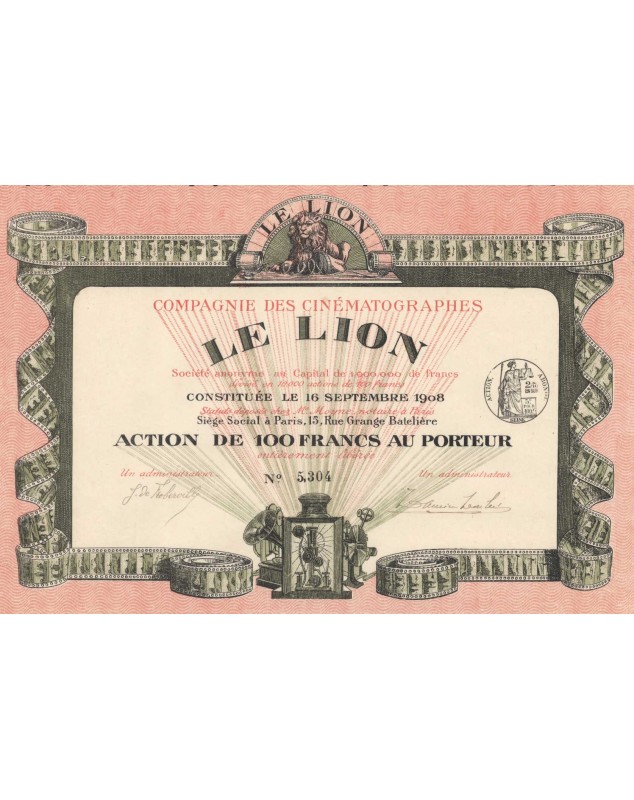 Share to bearer of 100 francs issued in Paris (head office 15 rue Grange Batelière in Paris) in 1908.

In 1907, aristocrats committed funds to a film business which in 1908 became Compagnie Le Lion. The brothers Pierre, Jules and Lucien de Froberville own 51% of the company's shares. Pierre is Chairman of the Board of Directors, Roger de Baulaincourt is Commercial Director. Théophile Michault, former director of Cinémas-Hall is technical director and manages the Pré-Saint-Gervais studio, created by Galand & Cie. In 1908, Jonathan Jules Bernheim joined the company as commercial director and obtained 300 founder shares. He died 4 months later and Roger de Baulaincourt took over the management.

In two years, the company produced more than 200 films, shot by Georges Hatot, an explorer named Jules de Froberville, Charles Martel, who brought back the only images of the Negus Ménélick (Abyssinie), Molinari ...

Organizational difficulties, internal trials, lack of financial support, as well as the closing of the American market will cause the loss of the company in 1912, the dissolution taking place in 1913.

Superb illustration of a lion and cinematographs.