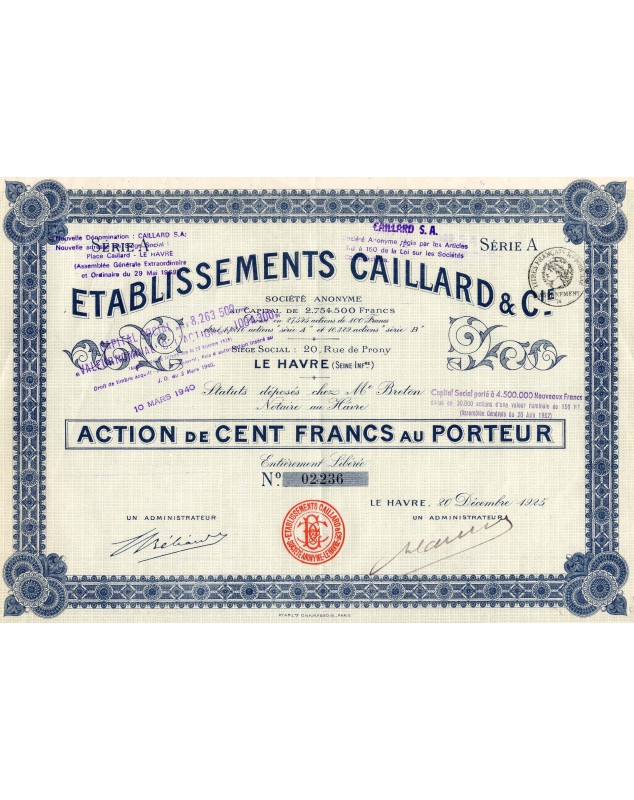 Founded in 1859 by Pierre and Victor Caillard, the company has long been one of the jewels of port metallurgy in Le Havre.

Ateliers Caillard-Frères are located in the Perrey district.

Pierre dies in 1895 while a new boiler workshop is built. In 1898, Caillard et Cie, managed by Victor, became a limited partnership. When his father died in 1905, his son Georges succeeded him, while Henri (son of Pierre) led the naval repair.

In 1922 is created the S.A. Caillard. Georges died a few months before the bombing and burning of the factory in the summer of 1944.

In 1957 and 1960, Caillard successively absorbed the Béliard Crighton Cie plant and its 1,000 employees, as well as the Technical Services of Compagnie des Chargeurs Réunis.

The activity declines from the sixties even if the company still has 1300 employees in the early 80s with, in particular, a major ship repair business.

The company filed for bankruptcy, the ship repair part is stopped and the handling and lifting part is taken over by Fives-Lille.

Fives-Lille sells the Havre company to Rolls Royce in 1996. The English shareholders announce the closure to the last employees on September 14, 2000.