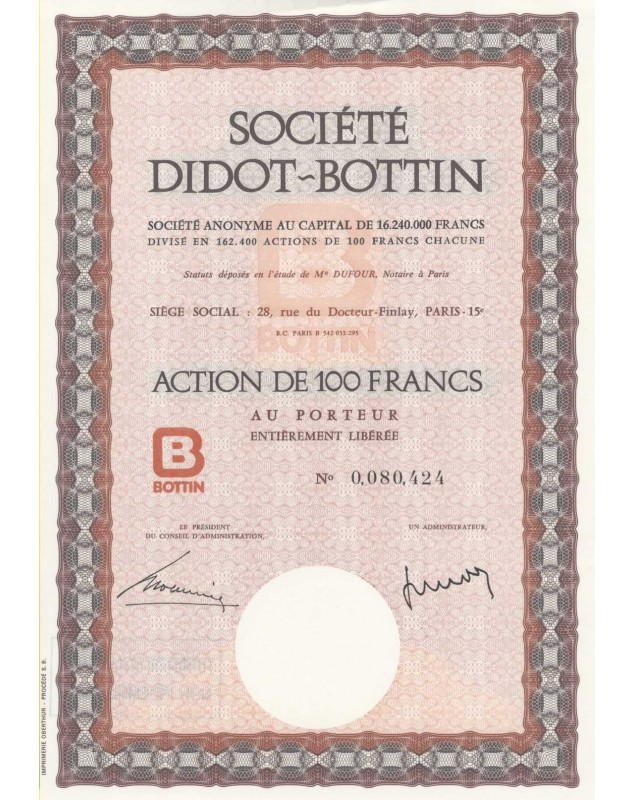 Famous directory initially limited to Paris, then extended from 1804 to departments, foreign cities and then to colonies.

Firmin Didot (1764-1836) was part of a famous dynasty of printers, responsible in particular for the first stereotype editions, for the typography of assignats issues.

Sébastien Bottin (1764-1853) was a French administrator and statistician who gave his name to a Directory of Commerce and Industry. In 1796 he founded the Société de l'Almanach du Commerce, the ancestor of telephone directories.

When Bottin died, the Didot family took over their business and continued to publish the directory, coupled with the Didot business directory. In 1881, the Didot-Bottin company became a public limited company listed on the stock exchange.

In 1903, the company published the "Bottin mondain" ("Whos' who), the first French directory of personalities from all of Paris.

In the 1960s, the company abandoned directories to turn to professional publishing with Vidal medical dictionaries (1979).

The Didot-Bottin company, renamed CFI, is today controlled by an investment fund which endeavors to make it a real estate company.

Stamps on the back of the title: Series title, non-compensable.