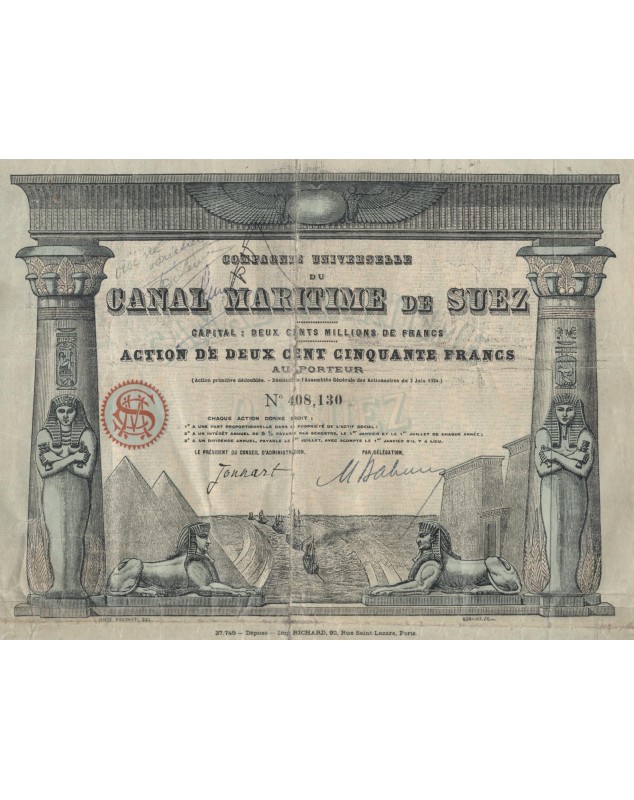 with many coupons (a sheet of coupons is separated)

F condition: the document had been torn in and has been repaired.

Document signed by Charles Jonnart (1857-1927), French parliamentary politician, local elected representative and businessman as administrator and president of the Compagnie de Suez, taking over from Arenberg, both great figures of the "colonial party". Jonnart will be appointed to the General Government of Algeria.

The Suez Canal was pierced between 1859 and 1869 under the direction of Ferdinand de Lesseps.

It was inaugurated on November 17, 1869 in the presence of prominent figures from the Arab and European worlds, including Empress Eugenie and Emir Abdelkader. But the canal has a much more distant origin, some 1800 years before our era. The idea arose very early on to allow boats to pass from the Nile to the Red Sea and thus, in effect, connect it to the Mediterranean. Many sovereigns attached their name to the project - Sesostris III, the first to order its digging, then Neko II, the great Darius, Ptolemy II Philadelphus, Trajan ...