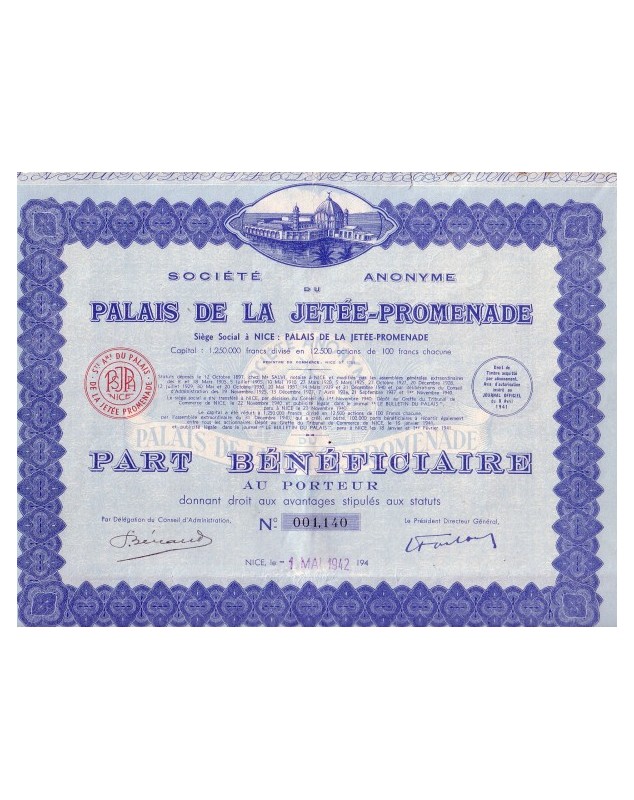 Vignette illustrated with the building.

The Palais de la Jetée-Promenade is a tourist building built on stilts in 1882 along the Promenade des Anglais in front of the public garden.

This building experienced many setbacks. Inaugurated on April 1, 1883, it was burnt down on April 4!

The Palace consisted of a large café-restaurant, a large village hall, an auditorium, reading and conversation rooms, and casino, Baccarat and Petits Chevaux gaming rooms. The company operating the Palace went bankrupt, a buyer was found in 1889. Two years of renovation followed.

A new company was created to operate the Pier-promenade and its Casino. Hilarion Hirschler, former director of the Casino de Boulogne and virtuoso of the organization of receptions and parties, organized the inauguration on Saturday January 10, 1891. Hirschler invited the entire elite of the city's society and official society at great cost.

But the general partnership "Hirschler et Cie" which he had founded on November 6, 1890 with a certain Charles Pacile, having for object the exploitation of the casino located in Nice (the Jetée-Promenade), provided that he had to pay no later than November 15, a sum of 500,000 francs in the social security fund.

However, he had paid in all and for all only 125,000 francs. Pacile paid his share, but Hirschler, in order not to pay, had to dissolve the company and declare it bankrupt. He was personally prosecuted for the liabilities of the company which amounted to 240,000 francs. Hirschler, despite his setbacks, was not discouraged.

A year later, he was found Director of the Casino de Bagnères de Bigorre.

The Palace was destroyed in 1944 during the Second World War by German troops.